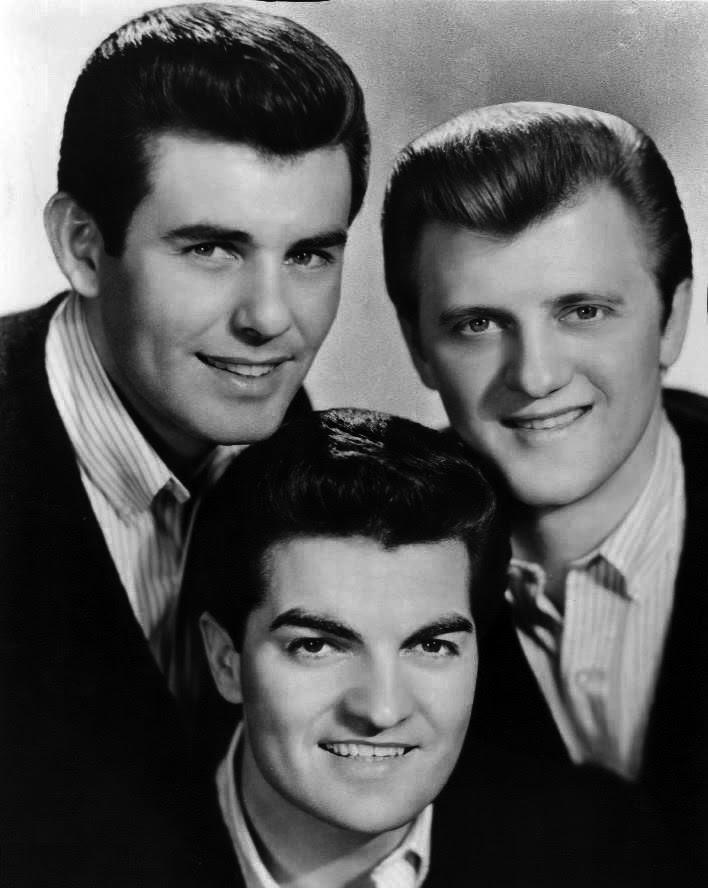 If you love pop vocal groups, as I do, then you're probably a fan of the Lettermen.

But if you were around in the early '60s, you might have thought for a moment that the Lettermen were just another male pop vocal group on Capitol Records, the home of the Four Preps and the Four Freshmen. They weren't.

The Lettermen, unlike all of their vocal group peers, went on to have a 15-year career on the international pop charts. Their name might have been retro, but their sound was progressive.

They hung out a few times with the Beach Boys, with whom they shared a producer (Nick Venet), and they worked like crazy to make excellent music and put on first-rate shows. The quality of their recordings was uniformly high.

The original Lettermen, when the group formed in 1959, were Jim Pike, Tony Butala, and Bob Engemann. In 1967, Gary Pike, who was Jim's brother, took over for Engemann.

The original lineup created some of the most sublime harmonies of the '60s on hits such as "The Way You Look Tonight," "When I Fall in Love," and "Theme from 'A Summer Place'."

After Gary joined, the Lettermen kept cranking out the hits with "Goin' Out of My Head/Can't Take My Eyes Off You," "Put Your Head on My Shoulders," "Hurt So Bad" and John Lennon's "Love," among many others.

Gary is on the right on this album cover:


The Lettermen stayed popular much longer than other male pop vocal groups from that time. Why?

Couple of reasons. We managed to have a hit every year, which kept us on the map. Our albums always sold well because we took care to put them together well.

None of us were songwriters, so we usually recorded old standards or songs that were popular at the time, and made great effort at doing good arrangements and really actually improving on the songs. The other thing is, we really worked hard to do a good show in person. We toured a lot and did a lot of shows. We were entertaining in person. We didn’t just stand there and sing our songs. We did comedy, more like a variety show or Wayne Newton but not as campy. We did a lot of TV.

The Lettermen’s sound was unique and very forward-looking. What do you think made it different?

It was unique. All of us were basically baritones. There was no bass and no real tenor. In a few songs, the top part was in falsetto, which was done by my brother Jim on these early albums. When I joined the group we shared doing the top part because our voices are very similar and many consider this the Lettermen signature sound.

The melody on many songs would change hands throughout the course of the song, so one person wasn’t singing the melody all the way through.

Because we were all baritones, we tried to keep the arrangements as close as possible, in a cluster. The parts were really close, so the melody would go along, the second part would cross above and below the melody, keeping the harmonies very tight.

The melody was in there, but it was surrounded by harmony parts. That was similar to the way the Four Freshmen did their arrangements. Brian Wilson of the Beach Boys was a big Four Freshmen fan too, and they [the Beach Boys] were on Capitol the same time as the Lettermen.

A couple of times before the Beach Boys had their first hit the Lettermen and the Beach Boys met in the parking lot at Capitol and sang Four Freshmen songs.

You mentioned the Four Freshmen, but can you talk about some of the other groups that influenced the Lettermen, and what you took from them?

The Hi-Lo’s were another group that had really tight harmonies. They had that jazzy sound too. Jim didn’t want to go quite that modern with the Lettermen—he wanted to be more commercial.

All three of the Lettermen were excellent soloists and musicians and paid their dues in other groups and knew what was up, and had those tight arrangements.

A lot of the albums were thematic. Did the Lettermen get to choose the themes, or did Capitol influence the repertoire?

The Lettermen were contracted for three-and-a-half albums a year, which was a lot. Whenever an album was due, which was quite often, sometimes a slight theme would be thrown out there, and everyone had input. We’d sit down with Nick Venet and discuss them and weed out songs. It was kind of a communal effort from everyone.

We all had input, but it all had to go through Jim. He and Nick Venet had final say. Later, we’d just pick the songs for the album and record it and give it to Capitol. Not to say that every song was picked by us—sometimes the producer would have a song for the album that we liked—but the artistic end of it was primarily the Lettermen.

Can you talk a little bit about the early Lettermen stuff?

The first song that was released on Warner Bros., “Their Hearts Were Full of Spring,” was recorded by Jim outside [in an independent studio] and the final master was taken to Warner Bros.

Jim had previously recorded a single with his first group for Warner Bros. [“Lucy D” b/w “Long Green” by Jim Pike & the Damons] that was not successful.

It was not successful, but Louie Prima and Keely Smith loved the group and wanted them to go on the road with them to sing and be their backup group. The girl singer in the Damons had just gotten married and decided she didn’t want to go on the road, and the Damons broke up.

“Their Hearts Were Full of Spring” was successful in a few towns. San Francisco. It was #1 in San Francisco. Phoenix. Nationally, it wasn’t successful. So Warner Bros. picked the next two songs. “The Magic Sound” was a novelty record and the guys didn’t want to do it, and that’s basically why they wanted to leave Warner Bros.

What about that “Old Rivers” parody that Jim and Bob did?

They were in the studio recording and Jim and Bob both were kind of screwing around doing Walter Brennan impressions, and they put Nick Venet on the floor, he was laughing so hard. So he said let’s do a record. It wasn’t released as a Lettermen record. It was just Jim and Bob. Tony wasn’t on the record at all. [Nevertheless, the label said “Tony, Bob & Jimmy.”]

Among the early Lettermen albums, College Standards is the odd one out.

Yeah. They thought all the kids who were teens when they first bought Lettermen records were now in college. Jim brought in Conrad Figueroa, who used to be a Damon, to sing the fourth part on some of those songs.

That wasn’t the only time we had a fourth part. Later, we used the Wrecking Crew a lot in our sessions, and Glen Campbell was one of them, and he sang with us on some songs.

Did you have any surprising international hits?

Oh, yeah. We’ve had a number of hits, especially in the Far East, that were different from the hits we had here.

One of our biggest hits in Japan was “Sealed with a Kiss,” which was on the flip side of "Summer Place."

Not too much European success. We didn’t really have any big hits in Europe.