Frank Gari's "Utopia" is one of those great, early '60s teen idol hits that should have been even more successful than it was. A Top 30 hit in 1960, "Utopia" is a beautifully arranged pop song that is similar in tone to Frankie Avalon's "Venus."


Gari had a couple of minor follow-up hits—"Lullaby of Love" and "Princess"—but went on to much greater success as a composer and producer of television themes, including the themes of Good Morning, America and The Oprah Show.

I interviewed Gari in 2001 when I was working on Hard to Find 45s on CD, Volume 7: More Sixties Classics for Eric Records. I was able to use only a snippet in the booklet, so here is the full interview. 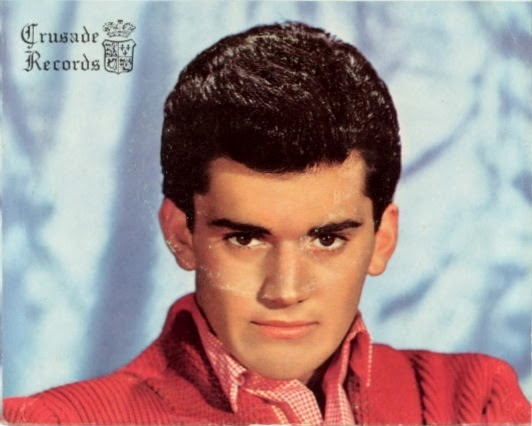 Did your parents have any ties to the entertainment industry?

How did you break into music?

It was very interesting. I had been singing in school, and I had a local band of my own. I was determined to become a rock 'n' roll star, so I put on my white buck shoes, I wore a white sweater, I had my pompadour hairdo, and I stood out in front of 1619 Broadway, which is the Brill Building in New York, which was the music capitol. I was just sending out vibrations to anyone who was walking in that building in hopes that maybe someone would recognize me and think that I had the right look.

Sure enough, a gentleman by the name of Jimmy Crane came up and said, "Who are you?" and I told him, and he said, "Can you sing?" I said yes, and he said, "Well, I have a record label called Ribbon Records, and my record company is upstairs in the Brill Building. Come on up and let's hear what you sound like, and maybe we'll cut a record with you." To make a long story short, that's exactly what I did.

He had a producer working for him by the name of Gerry Granahan, who produced my first record, which was entitled "Lil' Girl." It wasn't a hit, but I did a lot of record hops.

Down the hall was a gentleman by the name of Sy Muskin, and Sy Muskin had a record company called Crusade Records and this track entitled "Utopia." He said, "Boy, I love the way you sing, I wish you could record this for me, but you're tied up with Ribbon Records."

Anyway, I was released from the contract with Ribbon and quickly signed with Sy Muskin and Crusade Records and recorded "Utopia." It took six months to a year of doing record hops and promoting the record to start to get it to really make some noise. Sure enough, it started catching on, and hit the charts on Cash Box.

The owner of the record company, Sy Muskin, was also my manager, and he got me with the William Morris Agency, who got me quickly booked on some very big shows: The Steve Allen Show, The Merv Griffin Show. American Bandstand with Dick Clark, I did many times. The old American Bandstand show in Philadelphia.

My second record came out, called "Lullaby of Love," and I followed up with a third hit record, called "Princess."

That's kind of how it went. I got married, had two wonderful children, decided to quit being on the road and singing and fall behind the scenes as a writer and producer. I worked for Bobby Darin's publishing company, TM, which stands for Trinity Music, and worked for Bobby for a while.

My wife was originally from Cleveland, Ohio. We went to Cleveland on a vacation, and I fell in love with the countryside. Having the two kids, and feeling that New York City was no place to bring up children, we decided to move to Cleveland, which we did. I formed a jingle company in Cleveland, and we soon became the largest jingle company in the Midwest. We did about 3,000 jingles for phone companies, fast food companies, car dealers.

What were some of your best-known jingles?

We did Smuckers jams and jellies: "With a name like Smuckers, it has to be good." We did McDonalds: "You deserve a break today." Just lots of things.

Channel eight across the street, a CBS station, said, "You wrote such a great song for channel five, could you write one for us?" And they started to do very well in the ratings. And then the NBC station, channel three, called up and said, "You did such a great job for channel five and channel eight, can you write one for us?" And we did, and that was a success, and I found myself producing music for television stations, and now we are the leaders in news music. We write and produce music for some 300-and-something television stations in this country alone.

We do the theme music for Good Morning, America; for CBS This Morning; for all the ABC news, eyewitness news; the Oprah Winfrey theme. We do all the Fox News, a lot of NBC news, many programs on HBO and Discovery Channel. We just finished doing music for the National Geographic channel. So I'm still deeply involved in music.

My son, Christian Gari, and my daughter, Kimberly Gari, are basically the head of the creative department and run what is known as Gari Communications. They've been with me for 17 years.

That led me to California, where I now reside with my family, and my company is here, and we also have studios and an affiliate office in Atlanta. And that's the story. Married 40 years.


You haven't done any commercial recordings since the '60s?

No, no more recording. But I'm in the studio every day producing theme music.


Any other anecdotes about "Utopia"?

Yeah, when I was still on Ribbon Records and I was still under contract, and I became friendly with Sy Muskin, Sy said, "Gosh, I'd sure like to have you sing this song." And I said I was still under contract to Ribbon Records but I'd really love to. He said, "Do you have any friends that sing as well as you do?" So I sent all of my buddies from Paramus High School [in Paramus, New Jersey] to audition, and he auditioned about a half-dozen of my friends. In the meantime, I ended up getting out of my contract with Ribbon.


So none of your friends went on to greater fame?


You compose theme music now, but you didn't compose any of your Crusade sides [Note—Gari is credited as a cowriter of the "Lullaby of Love" b-side, "Tonight Is Our Last Night"]. Were you writing songs back then?

Yeah—not polished enough to turn into a record, but I honed my skills through the years.


Talk about some of the package tours you did.

I did the Alan Freed, Brooklyn Paramount theater; the Murray the K, Brooklyn Paramount; and Brooklyn Fox. I worked with Frankie Avalon and Fabian and Etta James and James Brown and Jerry Lee Lewis and Jackie Wilson and Tony Orlando and the Capris, the Shirelles.


Did you become friends with any of them?

Yeah, Tony Orlando became a very good friend of mine. And we were on the road together quite often. That was long before Dawn.