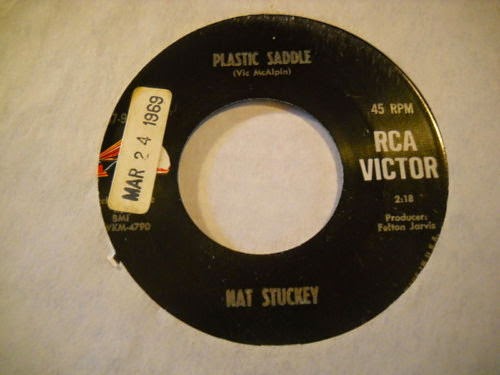 It has been described as a "clever country ode to unprotected sex." Others have said that its "innuendo is truly perplexing." The song is Nat Stuckey's 1968 Top 10 country hit "Plastic Saddle," and in it, an affluent man-about-town expresses his preferences in women in a series of double entendres. But what do they mean?

The lines that provoke most of the confusion are in the chorus:

The line "I can tell a fast train by the way she blows" is also open to interpretation.

In case you haven't heard the song, here's Stuckey's original:

The composer of the song, Vic McAlpin, died in 1980, so we can't ask him about his intentions. Nat Stuckey, the original artist, and Jerry Reed, who recorded the song in 1970, are gone too. In their place, I asked Danny O'Keefe, who recorded the song for his 1977 album American Roulette, what he thought it meant. O'Keefe said:

Someone told me about the song at the time I was recording American Roulette and I thought it was funny. I assumed the message was the singer/writer wanted a real woman, not one who relied on exterior applications for her beauty. It seems self-evident in the lyrics. I never met Vic McAlpin, so I don't know what his story was for the song. It's basically, as far as I'm concerned, a good-time song about wanting a real woman, but that's probably overstating it.

It seems obvious to me that the song was meant to be suggestive, regardless of the specific meanings that McAlpin attached to its double entendres. Although a country song that explicitly advocated unprotected sex probably wouldn't have flown in 1968, sexually suggestive "skin songs" were soon to become very popular in country music, so "Plastic Saddle" is a trailblazer in that sense.

"Plastic Saddle" is very funky for a country song, and fittingly, a funk group called City Lights recorded it for RCA in 1979.

Jerry Reed, as I mentioned, also recorded it. I think that his version is the best one. The All-Music Guide review of Reed's Better Things in Life album described this as a "raunchy cover of Nat Stuckey's 'Plastic Saddle'," even though it's faithful to the original:


And finally, the same year that Stuckey recorded "Plastic Saddle," June Stearns recorded a version of it. It seems like a very odd song for a woman to sing: