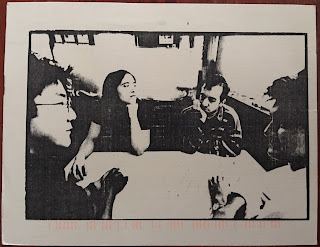 Digging through my records today, I found this 1998 Magnetic Fields tour postcard from Merge Records. I looked online and couldn't find any images or mentions of it, so I'm putting it here for anyone who's interested.

Magnetic Fields weren't touring to support a new album in 1998. Their last album at that time, Get Lost, had come out in 1995, and their next album, 69 Love Songs, wouldn't be released until 1999.

They had released a new single on Merge in 1998, though: "I Don't Believe You." It was a song that they would later re-record and include on the 2004 album i. The B-side was "When I'm Not Looking, You're Not There." Both can be heard below. So, I guess this postcard is from the "I Don't Believe You" tour? 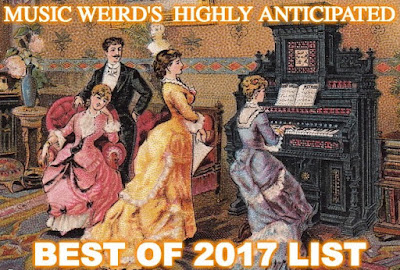 I'm late to the game with my best-of-2017 list. They say "better late than never," but this might have been a "better never than late" situation, considering how inactive this blog has become.

The way that I find new music—by constantly but almost randomly perusing new releases without relying on curated lists, podcasts, radio stations, music magazines and websites, music forums, the algorithms of streaming services and retail sites, etc.—means that my list doesn't have much in common with any other lists out there.

In fact, even though I listen to new music constantly, I was surprised at how little I'd heard of the music on other people's best-of-2017 lists.

Compiling these videos was surprising too, because I was constantly astonished at how many or how few views each one had.

The big trends in music for me in 2017 were electronic music and female-fronted bands. I read an article somewhere that said 2017 was the Year of the Woman in rock, which sounds plausible, but most of the artists it mentioned weren't ones that I was listening to. Nevertheless, women seemed to be racking up major achievement points in music last year.

Enough preamble. Here are my favorites of the music I stumbled across in my energetic stumblings of 2017.

Without question, the album I listened to the most in 2017 was this third album by Lithuania's Echo Delta. The entire album is simultaneously chill and engrossing enough to reward active or passive listening.

Way Yes's Tuna Hair wins my Most Anticipated Album of 2017 award. Like many of their earlier efforts, it's percussive, hypnotic, and death obsessed, but the latter characteristic is ratcheted up several notches this time around. Their album release show at the Spacebar in Columbus, Ohio, was awesome.

Alvvays received a lot of deserved acclaim in 2017, but I liked this album by Brisbane, Australia's Major Leagues even more.

There's not a bad track on this double-EP release by Hazel English. I like the drum machine sound and the way that the lovely melodies and thoughtful lyrics contrast with the almost bloodlessly precise instrumental tracks.

I listen to a lot of electronic music, and it's hard for me to pinpoint sometimes exactly what it is that elevates one track or artist above the rest. It's more of a feeling, and as soon as I heard this album by Marsh, I felt it.

Epoch is all good, even if it doesn't have a track quite as amazing as the title track of the 2014 album Awake. When I saw them play in Nashville, Tennessee, last year, the drummer stole the show.

This is on a lot of year-end lists and with good reason. I didn't understand all the hype about their first album but decided to give Antisocialites a try, and I'm glad I did. "Dreams Tonite" should have registered in the Billboard Hot 100.

Hater the Swedish band, not the Soundgarden spinoff. Hater released both an album (You Tried) and an EP (Red Blinders) in 2017, and both are toppen!

The best Shout Out Louds album since 2007's Our Ill Wills.

The first side of this album sounds like what would have happened if Stevie Nicks had cut an album for Captured Tracks in 2011 or with Clan of Xymox in the 1980s. In the official video of the song "Moonlight Shadow," a freaky worm, like something from Deadly Spawn, appears at the 1:30 mark.

11. Petite League – Rips One into the Night (Native Sound)

Petite League's previous two albums, Slugger and No Hitter, were among my favorites of 2015 and 2016. How do they get that great guitar sound?

I still listen to Burning Hearts' debut, Aboa Sleeping (2009), periodically. Five years after their last album (2012's Extinctions), this new one appeared seemingly out of nowhere.

A new Summer Heart record is always a good thing. 101 changes things up a bit; it still has that hazy chillwave vibe but with more electronica.

Emancipator has been around for a while but is new to me after a fellow Tycho fan recommended them. I can see why a Tycho fan would be interested—Emancipator makes electronic/organic instrumental music too, albeit with more of a World Music and New Age orientation. Having now caught up with the entire Emancipator back catalog, I believe that the title track of the new album is as good as anything they've done.

I don't know anything about Petit Biscuit except that it's a French act, which I just learned while searching for the Soundcloud link above. Some of their YouTube videos have millions of views, though, so I'm clearly lagging behind the rest of humanity. This album, Presence, is filled with earworm electronica that incorporates cut-up Chipmunk voices. It also has some violin like Emancipator.

Soccer Mommy seems poised for a commercial breakthrough with her new album, Clean. 2017's Collection has more of a lo-fi bedroom pop quality than what I've heard of her new one.

Teen Daze is usually categorized as electronic/ambient, but this track is like New Age music with a steel guitar. You could slip this into a mix with songs from I Am the Center: Private Issue New Age Music in America and no one would notice. I've listened to Teen Daze on and off over the years, but this new album made me think that I should go back and listen to everything I missed.

Bicep is yet another example of the context-free environment in which I listen to new music. I know nothing about them except that they're Irish, which is probably why I listened to the album in the first place. The acoustic sound of the drums on this track isn't typical of the rest of the album.

I got this for the new Croquet Club track ("Night Lights") and really liked almost everything on the compilation. Here's Xinobi's "Far Away Place (Jody Wisternoff & James Grant Remix)":

I've followed Rebecca Black's career with some interest ever since "Friday" became a fluke hit several years ago, and her 2017 single, "Foolish," is her best yet. The video has a Daft Punk-looking dude playing guitar, and a better ending for the video would have been for him to take off his helmet and reveal that it's Rebecca underneath.

Little My put out a new album toward the end of 2016 that I didn't hear or even know about until it appeared on YouTube in its entirety in March 2017. One of the last purveyors of that classic twee sound, they deserve more recognition.

Posted by Greg Adams at 8:04 AM No comments: