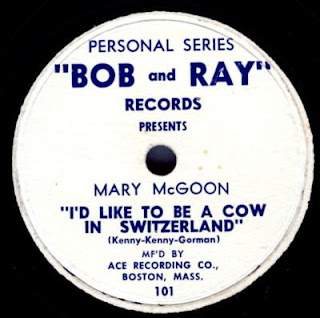 Radio comedians Bob Elliott and Ray Goulding weren't singers, but they did some intentionally bad singing on their radio show from time to time. The duo was on the air from 1946 to 1987, and in those 41 years, although they released a number of spoken-word comedy albums, they released only one record of music: "Mule Train" b/w "I'd Like to Be a Cow in Switzerland," both sides of which were performed by Ray Goulding's Mary McGoon character in 1949. 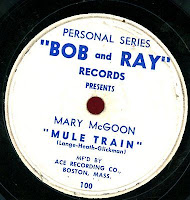 The record came about after Goulding-as-McGoon performed "Mule Train" on the air to poke fun at the flood of cover versions that appeared when Frankie Laine's version became a hit. "Mule Train" was so ubiquitous that even Mary McGoon—the elderly host of a recipe segment on Bob and Ray's show—was singing it.


After first performing ["Mule Train"] live on the program, requests poured in for Mary to repeat the number; some even suggested that she put it on record. Finally, Ray recorded it in Mary's voice, joined on the choruses by Elliott as Tex Blaisdell. Bill Green provided the piano accompaniment. On the flip side, Mary sang, "I'd Like to Be a Cow in Switzerland," with music and lyrics by Charles and Nick Kenny. ... With McGrath's* okay—in exchange for a cut—the record was highly promoted on the station. But when the pressed discs arrived shortly before Christmas, there was no shipping operation in place. Finally, Sam Clark, an owner of a small Boston record distributorship with a taste for offbeat labels, let the boys use his basement. Night after night, after their regular WHDH shifts, the two processed all mail-order requests themselves, including packaging and mailing, in Clark's garage. Everyone involved—including McGrath—made out okay.

On the Air: The Encyclopedia of Old-Time Radio says that Bob and Ray's recording of "Mule Train" and "I'd Like to Be a Cow in Switzerland"—released on their own Bob and Ray Records label—"quickly sold out its 3,000-copy pressing and was soon a collectors item."


Although "Mule Train" was the A-side of the single, "I'd Like to Be a Cow in Switzerland" seems to be the best remembered of the two Bob and Ray recordings, perhaps because that song hasn't been as widely recorded as "Mule Train."


The David Pollock quotation above says that Charles and Nick Kenny wrote the music and lyrics of "I'd Like to Be a Cow," but the song was actually written by the third person whose name appears on the label: Pat Gorman.

Gorman was a longtime secretary-treasurer of the Amalgamated Meat Cutters' Union (AMCU). In 1947, the AMCU recorded 10 songs by Gorman and pressed them on records to give to the union's members as Christmas gifts. Billboard reported that Gorman, "for 30 years an executive of the union, has never had any formal education, but has written 735 compositions of all types of music since he was 10 years old." (A book about Gorman, Picket and the Pen: The Pat Gorman Story, was published in 1960.)

Gorman was inspired to write "I'd Like to Be a Cow" when he took a trip to Europe and felt that Switzerland was the only peaceful place on the continent.


Nick and Charles Kenny of Bob Hope's Goldmine Music publishing company came across the song and began promoting it in conjunction with Paull-Pioneer Music, another music publishing firm. That must have been when they put their name on the song as "co-writers." Afterward, the song allegedly was recorded by Louis Prima for Majestic and by Irving Kaufman, but I haven't seen these records. (No version by Prima appears on discographies of Majestic's releases.) Al Trace and Nate Wexler definitely recorded the song, at least for a radio transcription. Plans were afoot at that time to incorporate the song into an animated short, but I don't know if that ever came to pass.

After Bob and Ray's reasonably successful debut as musical recording artists, they never did it again. The closest they came was on the 1958 RCA-Victor album Bob and Ray Throw a Stereo Spectacular, which featured songs by various RCA artists interspersed with Bob and Ray skits that mainly serve to demonstrate stereo effects. Bob and Ray themselves don't sing on the album, but most of the album's content is music.

Bob and Ray's recordings of "Mule Train" and "I'd Like to Be a Cow" can be found on RadioArt's 4-CD set The Best of Bob and Ray: Volume 4.

Oh, the Swiss are vegetarians
And Swiss cheese is the rage
I'd like to be a cow in Switzerland
And live to a ripe old age