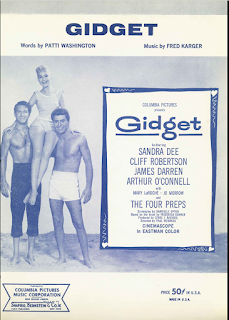 In 1957, Frederick Kohner published the novel Gidget: The Little Girl With Big Ideas and set in motion the surf craze that swept America in the 1960s. Based on his teenage daughter's real-life adventures as a California surfer, the book was a pop-culture sensation that sold a half-million copies. But Gidget the character outlasted the fad for surf music and beach movies and has lived on to the present day through books, films, television, and—today's topic—music.

Kohner wrote eight Gidget books, the first of which was made into a movie in 1959, starring Sandra Dee as Gidget and teen idol James Darren as her love interest, Moondoggie. It was Hollywood's first surfing film. 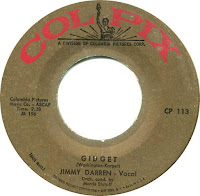 The film's original theme song, "Gidget," was released on singles by both Darren and the Four Preps, who also appear in the film. The Four Preps sing the theme song over the opening credits and appear in a beach party scene in which they perform "Cinderella." Their versions of "Gidget" and "Cinderella" were released on 45 by their label, Capitol Records. Darren's version of "Gidget" and the song "There's No Such Thing," which he sings to Gidget in the film, were released on 45 by Darren's label, Colpix Records. 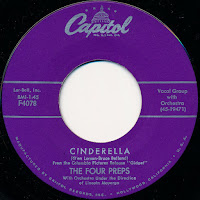 These were the most commercially successful songs from any of the Gidget movies, but that's not saying much—Darren's version of "Gidget" peaked at #41 on the Billboard pop chart, and the Four Preps' "Cinderella" reached #69, so they weren't major hits.

The music in the Gidget films, it's worth mentioning, wasn't merely grafted onto Kohner's story. Music was ever-present in the Gidget novels too, with references to artists such as Fats Domino, quotations of song lyrics, and the inclusion of musician characters. Gidget herself is a folk music fan who becomes romantically interested in a folk singer in Gidget Goes Hawaiian (the book; in the film he's a dancer), expresses a preference for the Kingston Trio and Harry Belafonte in The Affairs of Gidget, and, in the same book, spends a lot of time listening to Mozart and Wagner in the home of a divorced dentist.

The musical content of the Gidget books and movies anticipated the beach movies of the 1960s, like Beach Party (1963) and Beach Blanket Bingo (1965), although those films—unlike Gidget—had so much music that they're often categorized as musicals. And some of the actors from the Gidget movies, such as Deborah Walley and Joby Baker, went on to appear in beach, bikini, and/or Elvis movies.

After the first Gidget movie, two more feature films followed: Gidget Goes Hawaiian (1961) and Gidget Goes to Rome (1963). In an odd reversal, these two movies weren't based on Kohner's books—the corresponding books were based on the movies. Ruth Brooks Flippen wrote the screenplays, and Kohner—who was a screenwriter—wrote novelizations of the screenplays.

Despite this arrangement, the quality of the books didn't suffer; the novelizations read like Kohner's other Gidget books, in part because Kohner took many artistic liberties with Flippen's stories, making substantial changes to plots and characters. Flippen was probably tapped to write the screenplays because Kohner's second Gidget novel, Cher Papa (1959), featured Gidget's father as the main character. It was an odd entry in the series and might not have worked as source material for the second Gidget film. 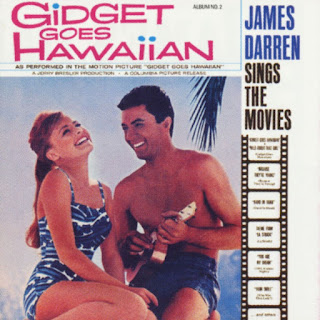 Darren, as much a singer as an actor, also sang in all three films. In Gidget Goes Hawaiian, he sang the title song and "Wild About the Girl," which is directed at Gidget but doesn't mention her by name. In Gidget Goes to Rome, he sang "Gegetta" (the Italian-accented pronunciation of Gidget's name) and "Grande Luna Italian (Big Italian Moon)."

Darren's label, Colpix, released the songs on singles, but none of them were national hits. Darren put out an album called Gidget Goes Hawaiian: James Darren Sings the Movies, which included his two songs from the movie along with songs such as "P.S. I Love You" and "Because They're Young," and it was a #132 hit on the Billboard album chart. The one hit single that resulted from Gidget Goes Hawaiian was Duane Eddy's rendition of the theme, which was the B-side of his 1961 Jamie Records single "Theme from Dixie" and "bubbled under" the Billboard Hot 100. 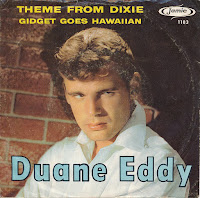 As for non-hit cover versions, Carlo Gerace covered Darren's "Wild About That Girl" for Chancellor Records in 1961 without success. Leroy Holmes included "Gidget," the theme from the first film, on his 1962 album Movie Themes for Teens.

Gidget the television series launched in 1965 with Sally Field as Gidget, and the theme song, "(Wait Till You See) My Gidget" by Johnny Tillotson, was released as a single by MGM Records but wasn't a hit. (The flip side, "Our World," was a minor chart item.) Darren's label, Colpix, tried to stay in the Gidget game by releasing a competing version of "(Wait Till You See) My Gidget" by Billy Carr and met with similar commercial indifference.

Some well-known composers and arrangers worked on the musical score for the series: Dave Grusin, Stu Phillips, Charles Albertine, and Hugo Montenegro. And Ruth Brooks Flippen, the screenwriter of Gidget Goes Hawaiian and Gidget Goes to Rome, wrote a number of episodes. 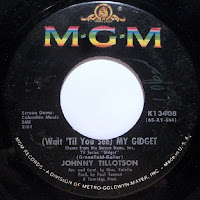 The TV series ran for two years, but after its end, Gidget soon graced the small screen again in the made-for-TV movies Gidget Grows Up (1969) and Gidget Gets Married (1972). Gidget Grows Up starred Karen Valentine as Gidget and actor-turned-teen-idol Paul Petersen ("My Dad") as Moondoggie. (Petersen, incidentally, had been one of James Darren's label mates at Colpix Records in the early 1960s.)

The theme song of Gidget Grows Up, "Growing Up," was sung by Jean King (AKA Jeanie King) of the Blossoms/Phil Spector fame. This song doesn't appear to have been released on record.

Gidget Gets Married starred Monie Ellis as Gidget and former child actor Michael Burns as Moondoggie. The theme, "Good Morning Love," was cowritten by Jack Keller, the composer of "(Wait Till You See) My Gidget."

Also in 1972 appeared Gidget Makes the Wrong Connection, an animated Gidget movie that was produced by Hanna-Barbera and aired as part of The ABC Saturday Superstar Movie lineup. Kathy Gori performed the voice of Gidget in a story about Gidget dealing with gold smugglers. Moondoggie was nowhere in sight. This was likely a pilot for an animated series that never happened.

That was the end of Gidget for a while. More than a decade later, the character was revived for the 1985 TV movie Gidget's Summer Reunion, which picked up where Gidget Gets Married left off: Gidget was married to Moondoggie and dealing with adult problems and a niece, Kim, who wanted to take up surfing. Gidget and Moondoggie were played by Caryn Richman and Dean Butler (AKA Almanzo from Little House on the Prairie). Kim was more like the teenage Gidget character of old than the adult Gidget was.

Gidget's Summer Reunion was essentially a pilot for the series The New Gidget, which ran for 44 episodes from 1986-88 and starred Richman and Butler from the TV movie but replaced niece Kim with niece Dani, played by future soap-opera star Sydney Penny. The theme song didn't mention Gidget or provide any exposition. It was one of those bland feel-good songs of the sort that was commonly used as a television theme in the 1980s.

The New Gidget was the last of the Gidget television shows, but Gidget didn't disappear. In 1999, Surfer magazine named Kathy Kohner Zuckerman, the real-life Gidget, the seventh most influential surfer in history. The original Gidget novel was reprinted in 2001, and Kohner Zuckerman was the subject of the 2010 documentary Accidental Icon: The Real Gidget. 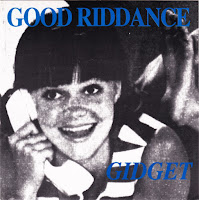 Outside of the official Gidget movies and television shows, Gidget occasionally has been referenced in music. A few examples include the Suburban Lawns' song "Gidget Goes to Hell" (1979), the Swingin' Teens' song "Gidget's Bitchin' Beach Party" (1987), and the cover of the band Good Riddance's 1993 EP Gidget.

Unfortunately, all the Gidget novels except for the first one have been out of print for decades and can be expensive to buy on the collectors' market. They're fun and well-written books, though, and deal more frankly with sexuality than you might expect from young adult novels of their time. Like the TV movies, the books follow Gidget into adulthood as she gets into romantic entanglements and navigates her rocky on-again, off-again relationship with Moondoggie, but in the books she never marries or goes all the way with any of the guys.

Note: If you'd like to watch these in the best quality, some releases are better than others. Sony Pictures released the first three movies on DVD as The Complete Gidget Collection, but the movies are cropped. You can get the first film in beautiful widescreen HD on Twilight Time's limited-edition Blu-ray, and all three films are presented in widescreen on the Australian DVD set Gidget: The Movie Collection. (The Australian set also includes Gidget Gets Married, although that is not widescreen because it was made for TV. You'll need an all-region player in order to play these DVDs.) Gidget Gets Married is also available separately as a print-on-demand DVD-R. The entire 1960s Gidget TV series is available on DVD for dirt cheap. Gidget Grows Up, Gidget Makes the Wrong Connection, Gidget's Summer Reunion, and The New Gidget have not been officially released on DVD, but you can find at least some of them from unofficial sources.


Commercial recordings of songs from the Gidget movies and shows

Early Pleasures: Memoirs of a Sensual Youth
The Continental Kick (1962)
Mister Will You Marry Me? (1963)
The Gremmie (1967) (A "surfing and sex" paperback intended to appeal to the Gidget audience)
Kiki of Montparnasse (1967)
The Magician of Sunset Boulevard: The Improbable Life of Paul Kohner, Hollywood Agent (1977)

IMDb has a long list of screenplays that Kohner wrote or cowrote.

Posted by Greg Adams at 7:42 AM No comments: