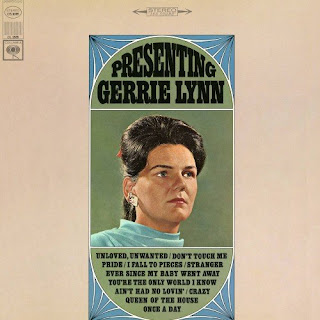 Lynn never had a national hit and didn't have a very long recording career, which makes the reissue all the more baffling. As of this writing (February 2017), the album has had zero sales on Amazon.com, and I was the first to view some of the tracks on YouTube, so the reissue doesn't appear to have been due to popular demand.

Lynn was a country singer from Chicago who first recorded for Nashville Records, an imprint of Starday Records, where she cut two singles in 1964-65.

The first single was "Every Time I Do Right" and "Lonely," the latter of which featured Pete Drake and his talking steel guitar. Tommy Hill produced, and Lynn wrote one song by herself and co-wrote the other with Nashville Records label-mate Billy Hill.

The second single, "I Love You More and More Every Day," became a Top 10 hit at WJEF in nearby Grand Rapids, Michigan, in 1965. Lynn also enjoyed some airplay on Chicago's WJJD, which changed formats in 1965 from Top 40 pop to country.


Encouraged by this success, Lynn sent a demo to producer/A&R chief Don Law at Columbia Records, and he signed her.

Lynn's Columbia debut was "My Lips Will Never Tell (What My Eyes May Show)" b/w "Forget Me (The Next Time Around)" in March 1966. Law never called upon her songwriting abilities—everything she recorded at Columbia was composed by professional songwriters. 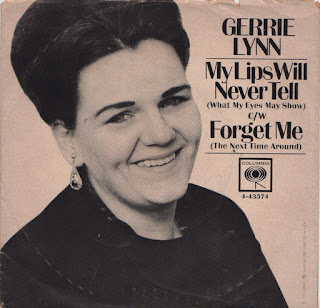 Lynn's sole album, Presenting Gerrie Lynn, followed later that year. It's a typical mid-'60s Don Law and Frank Jones co-production, with the kind of precise and uncluttered arrangements that I associate with Law's other Columbia productions around that time for artists such as Jimmy Dean and Carl Smith, although Presenting Gerrie Lynn is more pop oriented than Law's productions for Smith.

The album contains no originals—it's a routine assortment of popular country songs with few surprises. Lynn sings Patsy Cline ("Crazy," "I Fall to Pieces"), Connie Smith ("Ain't Had No Lovin'," "Once a Day"), Jody Miller ("Queen of the House"), and Jeannie Seely ("Don't Touch Me") as well as recent hits by Jack Greene, Ray Price, and Sonny James. The only non-hit song is "Stranger," a tune that Lefty Frizzell recorded (and Law and Jones produced) for Columbia in 1962.

The best cut, in my opinion, is "Unloved, Unwanted," a Kitty Wells song from 1962. Lynn's rendition has a wordless soprano vocal part on the chorus that sounds like a musical saw. The only other really notable arrangement is "Ain't Had No Lovin'," which features the distorted guitar sound introduced on Marty Robbins' "Don't Worry" (another Law production) in 1961.

Billboard listed the album as a "special merit pick" in its Dec. 3, 1966 issue, but HiFi/Stereo Review gave the album an unfavorable review:


Gerrie Lynn is the latest blossom to emerge from the hillbilly orchard. She sounds like a matronly Molly Bee, and on most of the bands on this debut disc, she seems curiously out of place in the idiom. She is really more of a pop stylist, and her slow, bluesy, almost lethargic approach to reading lyrics makes her a very boring interpreter.... 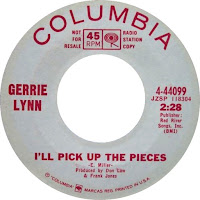 Billboard had a higher opinion of Lynn, and in its April 29, 1967 issue predicted that "I'll Pick Up the Pieces" (an answer to Patsy Cline's "I Fall to Pieces") would reach the Hot Country Singles Chart. The song didn't chart nationally but might be Lynn's best-known song. It nearly reached the Top 40 on WYDE in Birmingham, Alabama, and was included on the 2007 Bear Family Records anthology ...And the Answer Is: Great Country Answer Discs from the '50s and Their Original Versions.

Curiously, the flip side, "Down Home Country Girl," reached the Top 5 on WMAS in Springfield, Massachusetts.

The liner notes from the back of the original Presenting Gerrie Lynn album tell her story:


Spell it out—S-U-C-C-E-S-S! For that's what Gerrie Lynn's warmly appealing voice most definitely spells, and that's what this new Columbia album, PRESENTING GERRIE LYNN, most assuredly is!

Although Chicago-born Gerrie is a brand-new addition to Nashville's roster of recording stars, she's by no means new to Country music. This young lady has been a successful performer in the field ever since.... But let Gerrie tell you the story herself.

"One evening not long ago, my husband Bill and I went to a little club in Chicago that features live Country entertainment. Bill, who's always loved Country music, is a big fan of Grand Ole Opry's weekly broadcasts, as I am now, too. I enjoyed what I heard at the club so much, we found ourselves going back often.

"One night, without my knowing it, he and the bandleader decided to call me up to the stage to sing! Bill knew that as a youngster I'd sung in my church choir and that I liked singing around the house some of the songs I'd heard on our evenings out. Not only was I a big success with the customers, but I was hired as a regular performer at that club and others like it. These appearances led to my being featured at an auditorium show in Hammond, Indiana, in a program starring Carl Smith, Ernest Tubb, Jim Reeves, Sonny James and many more big names.

"This was an important turning point for me, for now I realized that I really loved performing Country music and wanted to be a part of it. I made a demonstration record and submitted it to WJJD, a Chicago all-Country music station. They aired it, and before long it rated high on their popularity charts and, of course, made my name known to a great many people. This really gave me confidence, so I sent a copy of the 'demo' to Don Law, Columbia's great Country and Western producer. He must have been mighty pleased, because he asked me to come to Nashville to make the album."

You'll be mighty pleased, too, when you hear Gerrie interpret great Country hits like Ain't Had No Lovin', I Fall to Pieces, Queen of the House, Unloved, Unwanted, and Don't Touch Me.


What was the first million-selling gospel single? The answer is not straightforward.

Many sources say that it was "Sorry I Never Knew You" by the Sego Brothers and Naomi, which reached #50 on the Billboard country chart in 1964.

That is a remarkably low chart peak for a record that supposedly sold a million copies, but its weak chart performance doesn't necessarily rule out the possibility that it was a big seller. Some bestselling records didn't chart at all or were under-ranked on the charts, such as albums that were sold through nontraditional channels (like television commercials) and albums that sold steadily over a long period of time without having the kind of sales spurt that would put them on a bestsellers chart (like Jim Nabors' albums).

In the clipping pictured above, Billboard itself repeated the claim that "Sorry I Never Knew You" was "the first million-selling gospel disk" but softened the claim by adding that it "is said to be the first."

Billboard might equivocate in this matter, but many books don't—some say straight-up that the Sego Brothers and Naomi's record is the first gospel million seller. One example is the 1979 Gospel Music Encyclopedia by Anderson and North.

I became suspicious of this claim after mentioning it to Bill Buster, who has operated both American Record Sales, Inc., and Eric Records since the 1960s and knows a lot about hit singles. He said that he has never sold a single copy of "Sorry I Never Knew You." That seemed odd.

After looking into it more, it turns out that Billboard and I were right to doubt this bit of gospel music trivia. The first gospel single to reportedly sell a million copies was released more than a half century earlier. It was the Fisk Jubilee Singers' "Swing Low, Sweet Chariot" in 1909, according to Bil Carpenter's 2005 book Uncloudy Days: The Gospel Music Encyclopedia.

It's worth mentioning here that many million-selling records were never officially certified as million sellers by the Recording Industry Association of America (RIAA), either because the records were released by independent labels that didn't (or couldn't) keep track of their sales, or because the records' peak sales occurred before the RIAA existed. Nevertheless, many records' status as million sellers is widely accepted despite the lack of certification.

Here is a chronological list, up to 1965, of the earliest million-selling gospel singles, which I extracted from Carpenter's book. The ones that are followed by an asterisk are not certified by the RIAA.

You'll notice that the Sego Brothers and Naomi are not on the list at all. What's up with that?

*Not certified by the RIAA.

Posted by Greg Adams at 7:39 AM No comments: