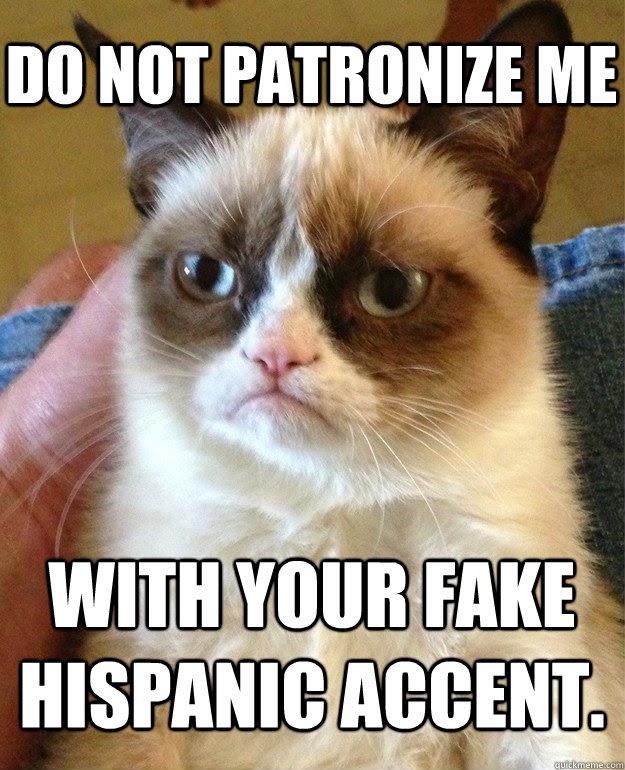 One practice that we should all be thankful has died out is the widespread use of fake accents in music. In pop and folk music, in particular, until the mid 1960s, artists routinely affected Italian, Mexican, Russian, Irish, Chinese, and other accents, often on songs that were filled with cultural cliches and unpleasant stereotypes.

Today on Music Weird, we'll stroll down Memory Lane and revisit some of the most atrocious fake accents from the popular music of yesteryear.


Country star Billy Walker laid on an awful fake Spanish accent in "Viva La Matador" in 1957. The lyrics (example: "heap big") seem to be a mixture of Spanish-American and Native American stereotypes.


"Go, Go Calypso" is Mamie Van Doren's contribution to the calypso craze. I don't think that Van Doren ever recorded a song that I would want to hear more than once.


"Bimini" is a song from Rod McKuen's first album, Songs for a Lazy Afternoon, which was released by Liberty Records in 1956. Most of the recordings were later reissued on a 1970 Sunset LP titled In the Beginning, but the most awful songs for a lazy afternoon—including "Bimini"—were left off. When McKuen sings straight, he's an acquired taste. Add a fake accent? Forget about it.

Rosemary Clooney – "Sailor Boys Have Talk to Me in English"


I can't tell if this is supposed to be a Mexican or Russian accent.


The talented Peggy Lee gave it her all with a fake Mexican accent in "Mañana," a song that was a #1 hit in 1948. In his book Latinos: A Biography of a People, author Earl Shorris described Lee's singing as "a cruel parody of a Mejicano accent," and wrote, "To the Mexican-American veterans of World War II who were, at the height of the song's popularity, attempting to move into the middle class, 'Mañana' was an almost physical barrier to be overcome in applying for a job or a business development loan. No stereotype could have been more damaging than the slothful simpleton portrayed by Lee."


The Playmates' fake calypso tune, "Pretty Woman," is especially bad because the accent is so halfhearted. Come on, guys—either do an accent or don't, but don't give us this weak in-between stuff.

No video, but here's a sample. 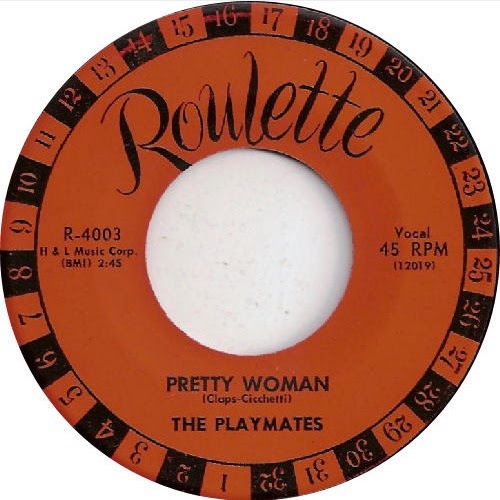 
This country vocal trio, of which a young Anita Carter was a member, couldn't make up their minds whether to do an accent or not on this faux-calypso number from 1957. Their pronunciation of "my man" sounds like "mama," which would give the song an interesting twist if that were the actual lyric.


This one makes me cringe. Years before Red Sovine became the king of trucker recitations ("Teddy Bear," "Phantom 309," etc.), he recorded for Decca Records without great success, apart from singing harmony on Webb Pierce's hit "Why, Baby, Why." "Little Rosa" is another song that Sovine and Pierce recorded together, and it's particularly awful, because it combines Sovine's terrible, annoying fake accent with a maudlin story about a dead girl.


José Jiménez was actually gringo Bill Dana. "The Astronaut" was a hit in 1960.


T. Texas Tyler really lays it on thick with the black dialect in his version of this old recitation, but no audio of it exists online, so I'm including Pat Boone's version instead. Pat recorded it under the title "Steal Away" and is more subtle with his dialect, but it's still there. Even for 1956, this recording seems to be in pretty poor taste with its references to "grotesque" negro countenances, etc. The dialect part of the recitation begins at 1:49. If you want to hear Tyler's yet-more offensive version, you'll have to track down the CD Unadulturated Country Songs on Germany's Cattle Records.

"Loco Man" from A Mighty Wind


The fad for awful fake accents in '60s folk music was parodied in the Christopher Guest film A Mighty Wind. 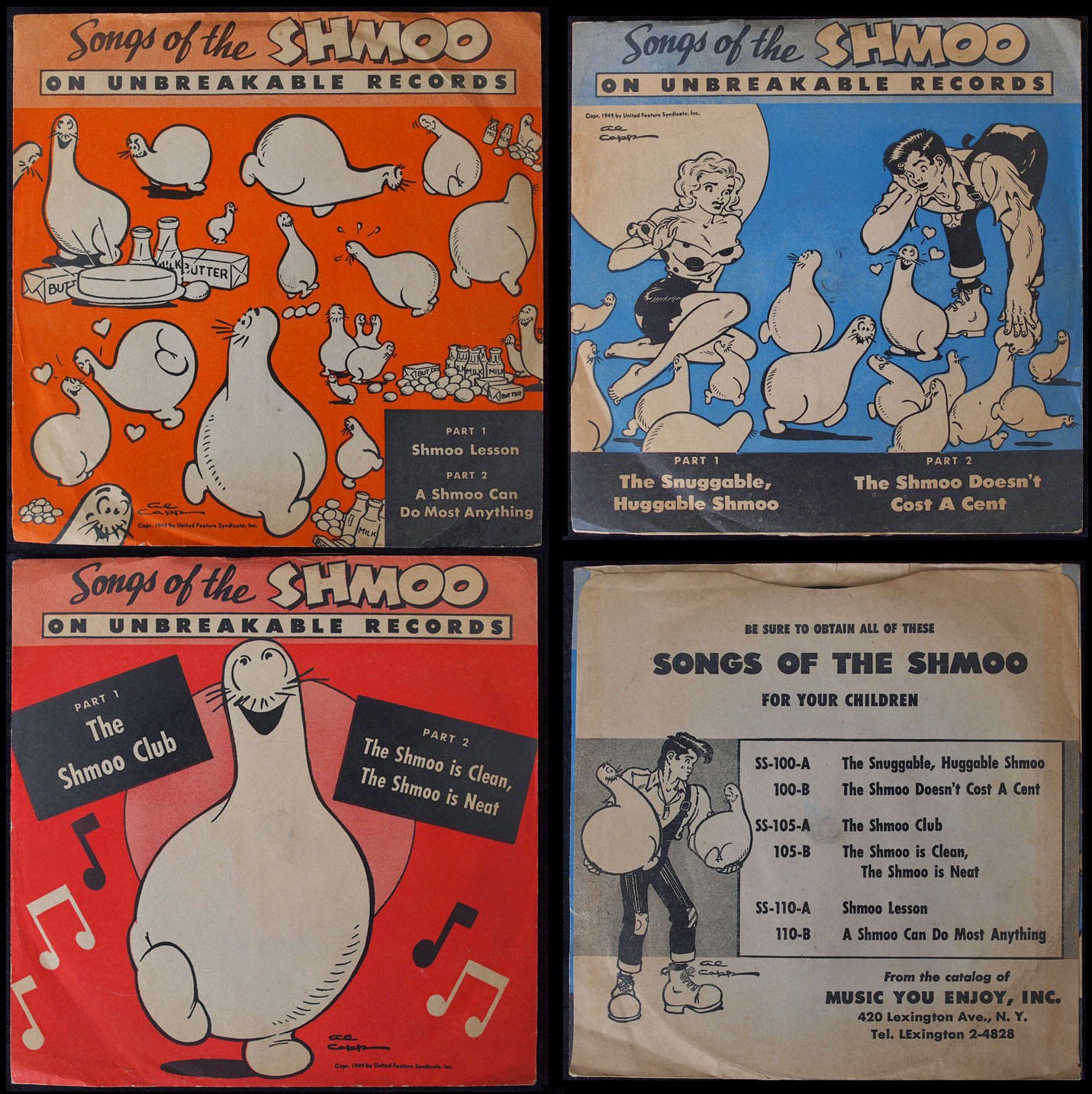 The merchandizing blitz around the shmoo character from Al Capp's comic strip L'il Abner was so excessive in the late 1940s that Capp quipped, "I think they even had shmoo toilet seats." Shmoo appeared on the cover of Time, and a headline in Life announced "The U.S. Becomes Shmoo-Struck." In addition to all of the shmoo toys and novelties in 1948-49, a number of shmoo recordings hit the racks.

The shmoo character was a social satire for which Capp was labeled a radical, because some people thought that shmoos were socialists or were anti-capitalist. Shmoos were happy, whimsical creatures that "willingly, gleefully sacrificed themselves for the good of humanity," as Rodger Brown wrote in Southern Changes. They were delicious to eat, and every part of their blobby bodies could be used to make useful items such as leather, buttons, and toothpicks.


The shmoo craze had mostly run its course by 1950. In 1949, the U.S. Treasury Department officially designated the shmoo as its mascot for a security bond drive. Ads for shmoo novelties continued to appear in trade publications in 1950 but tapered off soon thereafter. In 1950, Atlantic Records acquired the rights to Capp's L'il Abner characters, including the shmoo, for a series of children's records that were to be composed by Leo Israel. Two years later, Atlantic was still saying that the records were forthcoming. As far as I can tell, the songs were never released. 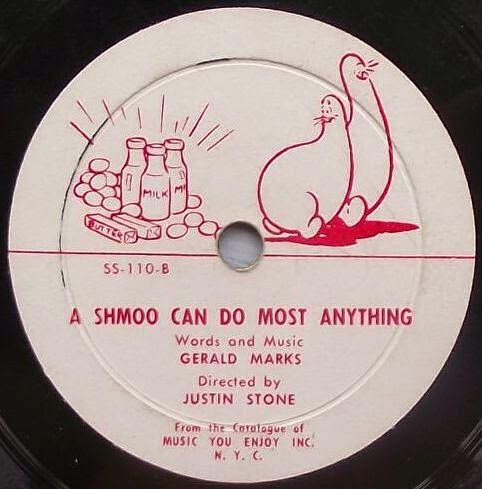 These were the first three shmoo records, which were issued individually on 7-inch, 78-RPM records that featured Capp's artwork on the picture sleeves (shown at the top of this page). The songs were written by Gerald Marks, the composer of the pop and jazz standard "All of Me," and the orchestrations were directed by Justin Stone, who led the Justin Stone Orchestra. Here's a snippet of lyrics from "A Shmoo Can Do Most Anything":


A shmoo can do most anything because he is a shmoo

A shmoo can be most anything that you want him to

If he's in trouble he won't cry

He knows just how to multiply

Four of these songs appeared again the following year on a 10-inch LP that was released by Allegro Records.

In 1949, Allegro Records obtained exclusive rights to re-record the songs from Music You Enjoy, and the new recordings were performed by vocalist Earl Rogers. Rogers was a tenor who recorded classical and children's music for Allegro and later served as the president of the New York Singing Teachers' Association from 1960-62.

Rogers' versions featured backing by the anonymous "Shmoo Band," directed by Daniel Mendelsohn, who also led the Daniel Mendelsohn Orchestra. The two new cuts, "The Broken Down Town of Dogpatch" and "Shmoo Music," were instrumentals. 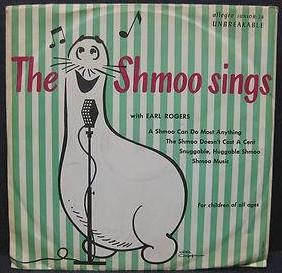 The record received a lukewarm review in Billboard, in which it was given a rating of 82 out of 100:


An especially attractive cover by cartoonist Al Capp, and the popularity of the L'il Abner strip, in which the Shmoo appears, should sell a lot of these sets. Most of the tunes are undistinctive, and the rendition is mediocre, altho the toy-size rural orking is very cute. One tune, 'The Shmoo Is Clean' is catchier than the rest, and drives home a good point. 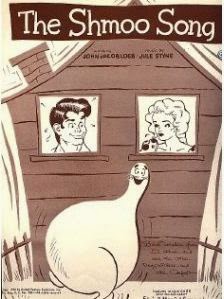 The shmoo is the power of jet propulsion

The laugh convulsion of Bob Hope or Shmilton Berle

The rich, foamy lather in your shampoo

Was caused by Mr. Shmoo 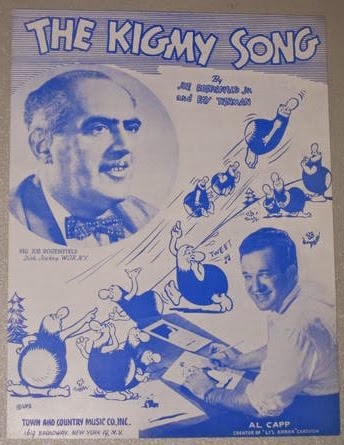 A lesser craze for Capp's shmoo-like kigmy creatures followed the shmoo craze, and at least one song about them was published. The kigmy ("kick me") was kind of like a shmoo that liked to be kicked in the butt.

In 1979-80, the shmoo was revived in the animated children's series The New Shmoo. Hanna-Barbera packaged together The New Shmoo and The Flinstones as Fred and Barney Meet the Shmoo. Here's the theme: 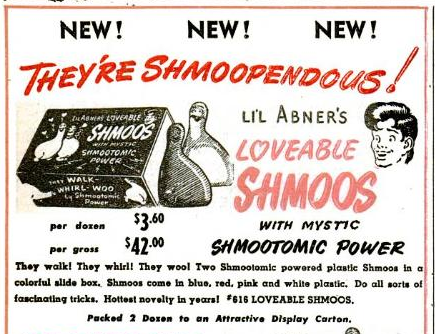 Posted by Greg Adams at 4:38 AM No comments: