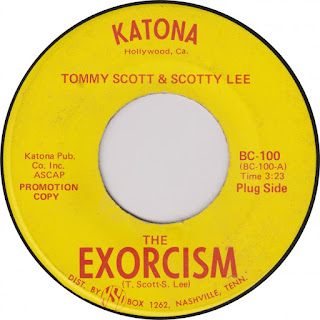 Without a doubt, one of the weirdest country records ever released is Tommy Scott and Scotty Lee's "The Exorcism" from 1975.

This retelling of the 1973 film The Exorcist includes not only a Latin incantation from a Catholic exorcism ritual but also a bizarre recitation that seems to have wandered in from a totally unrelated fundamentalist Christian country-gospel record.

Even though the song on the whole is pretty ridiculous, the piercing steel guitar, demonic laughter, and creepy woman's voice create a spooky effect at times. 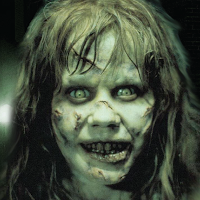 "The Exorcism" provides a pretty accurate plot summary of the film The Exorcist but gets a couple details wrong: The words that appear on the stomach of the possessed child (Regan, played by Linda Blair) are "help me," not "exorcise me," and the letters are merely raised in the skin, not bleeding or red.

If you're unfamiliar with the primary artist, Tommy Scott, then he might be the most prolific country artist you've never heard of. Also known as Ramblin' Tommy Scott of "America's last real old-time medicine show," he was born in 1917 and had a recording career that spanned the 1930s to the late 1980s. He played with Bill Monroe's brother Charlie, appeared on the Grand Ole Opry, recorded some rockabilly sides that are sometimes included on anthologies, and wrote an autobiography. Katona Records, the label that released "The Exorcism," was Scott's label on which he had been releasing his own records since the 1950s. 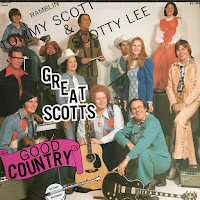 Tommy Scott's collaborator on "The Exorcism," Scotty Lee, was a member of Scott's group in the '70s and '80s, appearing on albums such as Great Scotts Good Country and Girls We Met at the Medicine Show.

Lee's real name was Scotty Blevins, and he was the son of Gaines "Old Bleb" Blevins, a country humorist who also played in Scott's band and was a fellow veteran of the medicine show circuit.

Lee and Scott wrote "The Exorcism" together and copyrighted it in 1974 under the title "Ballad of Exorcism."

I could find no contemporary reviews or mentions of "The Exorcism" in trade magazines, and it doesn't seem to have charted anywhere, so I'm guessing that it was simply too weird to gain any traction.

A blow-by-blow comparison of the lyrics of "The Exorcism" and the plot of the film The Exorcist.


Here's the audio of "The Exorcism":


And here's some vintage video footage of Scott and Lee:

The "Satanic panic" of the 1980s produced a number of Christian spoken-word recordings, usually distributed on cassette tape, that warned about the dangers of Satanic rock music and Satanic infiltration in our daily lives, but Christian evangelicals weren't the only ones who produced these kinds of cassettes. Mormon educator, inspirational speaker, and psychotherapist Don J. Black released similar youth-oriented tapes in the mid '80s to alert Mormon kids to the dangers of Satan, drugs, alcohol, and sex.

Black's tapes were released by Covenant Recordings, an imprint that offered cassettes, LPs, and CDs to the Mormon audience from the 1970s-2000s. The label was acquired by the Mormon bookstore chain Seagull Book in the 1980s and appears to have ceased operations when a competing chain, Deseret Books, acquired Seagull.

If you're not a Mormon, you might not be aware that an entirely separate Mormon entertainment industry exists. To non-Mormons, the bookstores of Salt Lake City, Utah, can seem like a parallel universe of completely unfamiliar English-language books, music, and movies.

That said, these Don J. Black recordings are atypical fare even within that sphere and seem pretty edgy in comparison to the feel-good family orientation of most Mormon media. Most of Covenant's releases were inspirational and/or historical and did not aggressively do "battle with Satan" headfirst the way that Black did on these cassettes. It would be easy to mistake these for evangelical Christian titles if you ran across them in a thrift shop. 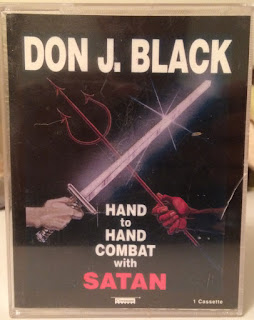 This cassette focuses on drug use, appearing a couple of years after the "Just Say No" campaign was introduced as part of the Reagan-era war on drugs. Despite the metaphor of hand-to-hand combat in the title, the cover art depicts battle with melee weapons. For some reason, Satan wields a trident like Neptune instead of a pitchfork.

The text below, which appears on the back of the cassette, erroneously claims that the word sorcery originally meant "one who uses drugs."


Don starts with Satan's beginnings and explains that Satan works on the weaknesses he discovers in each of us.

Don shows how badly Satan and his angels want physical bodies, how far they will go to get them, and how anxious Satan is to stop the growth of the gospel.

Satan uses alcohol, mind-expanding drugs, and sorcery to get to the kids today. The original meaning of the word "sorcery" is "one who uses drugs." Don shows how "drugs control the mind; the mind controls the body; the body houses the spirit; and thus Satan has just captured one child of God intact." He warns: "It isn't bad kids who are falling. It is the good kids ... who then become bad."

Don relates the experience of speaking at a fireside for youth who were in the drug culture; his own battle as a young man with Satan after the loss of a girl he wanted to marry; and how he won his battle through personal revelation.


The Battle with Satan to Stay Morally Clean (1986) 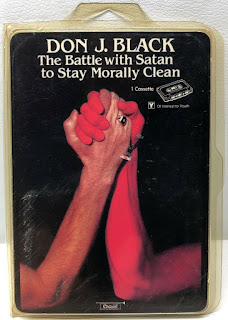 Black tackles teen sex and moral cleanliness in this 1986 recording. (The Music Weird previously looked at the secular books of moral instruction that were written by pop music stars in the 1950s.)

Satan is represented on the cover by a red arm that is doing battle via the sport of arm wrestling. Note: If you're concerned about cleanliness, you probably shouldn't hold hands with the Devil.

The text on the back says:

An inspiring speaker, Don Black directs his message to the youth of today. This is an excellent lecture in which he sensitively discusses the issue of chastity.

He states that the husband and wife have the only legal use of intimate relations. God has never changed that—never will. The love-making expression has never been approved as a form of recreation out of wedlock.

Brother Black tastefully defines and explains kissing, necking, light petting and heavy petting. He provides cautions and guidelines that can be followed by those that wish to avoid the pitfalls of early intimacy, but does not leave those who have fallen without hope.

This outstanding lecture can be shared with mixed groups of youth without any embarrassment. It can be an excellent teaching tool for both parents and youth leaders.

These cassettes were atypical even for Black. He authored numerous other cassettes, books, and audiobooks in the 1970s-1990s with titles like A Pocketful of Miracles: A Collection of Heart-Warming True Stories and Seven Keys to Happiness. Brigham Young University has a short biography of Black on its Mormon Literature & Creative Arts website.
Posted by Greg Adams at 7:43 AM No comments: