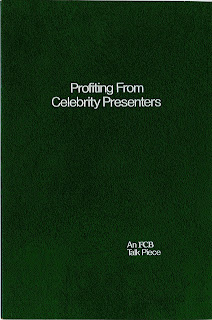 The FCB pamphlet was intended to help clients and employees anticipate and avoid the potential pitfalls of hiring celebrity spokespeople. It also provided some funny anecdotes about past ad campaigns involving famous folks.

The 32-page booklet was written by future novelist (and future Barnes & Noble creative director) Glenn Kaplan and gives an insider's view of the marketing industry as well as insights into audience attitudes toward musical pitchpeople:


Following a short-lived 1977 campaign for tractors, touted by country music stars, Prairie Farmer magazine conducted a survey among prospective tractor buyers. Although these consumers are fans of the singers used in the ads, 89.1% said that stars carried no influence whatsoever when it came to buying agricultural heavy equipment. Said one respondent, "Jimmy Dean and Ernie Ford don't give two hoops in a hailstorm about a farmer or the brands they promote."

That's a reasonable perception, although it doesn't make much difference in the cut-throat world of brand marketing when the celebrity spokesperson actually does care about the brand.

For example, the real-life Jimmy Dean was personally invested in the Jimmy Dean brand of breakfast sausage, since it's named after him, but that didn't prevent the company from
unceremoniously dropping him as a spokesman in 2004.

Dean was understandably unhappy about it. He said at the time, "The company told me that they were trying to attract the younger housewife, and they didn't think I was the one to do that. I think it's the dumbest thing, but you know, what do I know?" (Ironically, the company started using him in their television commercials again after he died.)

Pat Boone is mentioned several times in the booklet, first for his stint as a spokesman for West Bend from 1974-77. West Bend was "pleased with sales gains and awareness results" from the Pat Boone campaign but didn't renew his contact, because the "time had come ... to start telling a more complex and competitive product story." Not exactly a ringing endorsement of the celebrity endorser.

Pat crops up again in the chapter about government regulation, because his next advertising gig was for an acne medication called Acne-Statin, and it resulted in a landmark legal decision.

Pat—a man who seemingly never had acne in his life—claimed in the ads that his daughters used Acne-Statin to stay acne free. But it was all just a big pimply lie.


The Federal Trade Commission went after both the manufacturer and Boone. Pat agreed not only to stop appearing in the ads but also to personally pony up a portion of the money that the company had to pay to disgruntled customers. It was the first time that a celebrity spokesperson had ever been held personally responsible for deceptive advertising in which he or she appeared.

Profiting from Celebrity Presenters sees the silver lining in this ruling, noting that "this new hard line can only enhance the quality of celebrity commercials, giving them even more credibility with the public." I suppose that should give me more faith in the veracity of Dionne Warwick's commercials for the Psychic Friends Network.

In a refutation of the pamphlet, a newspaper clipping was folded up inside the copy I found. Written by Elizabeth Brenner for the February 22, 1981, edition of the Chicago Tribune, the article is "Marketing: Real people could outshine stars in ads."

The Go-Betweens: Unreleased songs in the ASCAP database 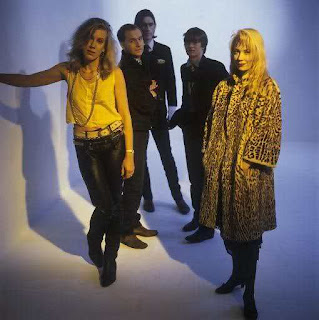 The ASCAP database contains a number of Robert Forster/Grant McLennan compositions that the duo copyrighted but never released.

If any of these songs were recorded, they might appear on the forthcoming Go-Betweens box set that will compile the group's albums Liberty Belle & the Black Diamond Express, Tallulah, and 16 Lovers Lane along with unreleased recordings and B-sides from that period.

The copyright registrations contain some interesting curiosities in addition to revealing the existence of these unreleased songs. Some examples:

"A Trip to Saturn"

"Outlaw" (Baby You Know, the group in which Forster's wife Karin was a member, recorded a song called "Outlaw" on their 1992 album Clear Water.) 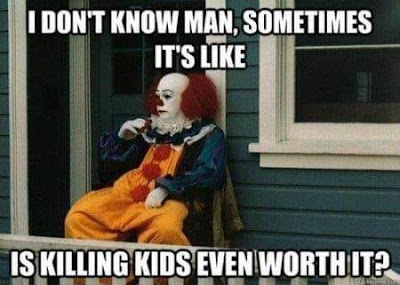 "Everybody loves a clown," sang Gary Lewis & the Playboys in 1965, but do they really?

It's clear that a lot of people fear clowns, judging from the popularity of clown horror films.

The 2017 remake of Stephen King's It, with Pennywise the Dancing Clown, became the highest-grossing horror film of all time, and that's just one example.

So many clown horror movies have been made that a clown car couldn't hold them all. Terrifier, Clown Kill, 31, Stitches, 100 Tears, Killjoy, Killer Klowns from Outer Space, Insane, and the highly anticipated (by me) Clownado are just a tiny sample of what's available.

Digging through the vinyl bins, you might occasionally be startled to find one of these jolly fellows looking back at you. 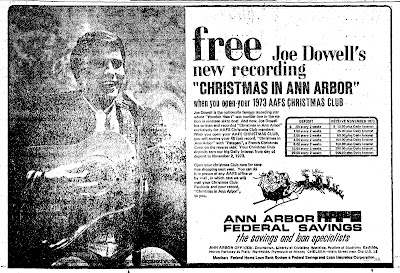 This 1972 advertisement from Chelsea, Michigan's Chelsea Standard promotes Joe Dowell's single "Christmas in Ann Arbor" as a premium for customers who open a Christmas savings account at Ann Arbor Federal Savings. (Click on the ad to enlarge it.)

The text of the ad says:

When I interviewed Dowell, he didn't remember the precise date on which he recorded and released "Christmas in Ann Arbor" on his own Journey Records label, and the record itself doesn't have a date, so this ad places it at either 1972 when the ad ran or 1973 when customers received the record (if it hadn't yet been manufactured when this ad was published).

I've written quite a bit about Dowell on this blog, because I wrote liner notes for and helped compile the 2004 Bear Family CD Wooden Heart, which collected most of Joe's Smash Records recordings from the early 1960s.

At the time that the CD was being prepared, Dowell (who passed away in 2016) gave me a lot of interesting ephemera from his career, so I've shared much of it here. I had never seen this advertisement until today, though.

Dowell, as the ad copy mentions, had a #1 hit on the Billboard Hot 100 with "Wooden Heart" in 1961. He then went on to record mostly religious music and commercial jingles in the 1970s and '80s.

Apart from a 1963 folk album that he convinced a furniture-store owner to release and a 1966 single for Monument Records, all of Dowell's recordings after he left Smash Records were either self-released, commercial jingles, or promotional recordings for organizations such as the Church World Service and Boy Scouts of America.

I previously posted some of Joe Dowell's commercial jingles here and here.

I've also posted a discography of his recordings and a lengthy three-part interview with him that starts here.

And here are both sides of this bank-premium single:

Posted by Greg Adams at 6:29 AM No comments: