When was Victor Young born?

Wikipedia and many other sources report that Victor Young was born in 1900, and it appears that no amount of evidence to the contrary will change it. I've tried to correct the date on Wikipedia, but it always reverts to 1900.

Further adding to the misinformation is Young's grave marker, which shows his birth year as 1901.

Young was a composer, conductor, arranger, and violinist who won an Oscar in 1956 for his score of Around the World in 80 Days. Some of his well-known compositions include "When I Fall in Love," "Love Letters," "Stella By Starlight," "My Foolish Heart," "I Don't Stand a Ghost of a Chance with You," "Street of Dreams," "Sweet Sue, Just You," and "Johnny Guitar." In all instances, Young composed the music and various lyricists wrote the words. He received 22 Academy Award nominations in his lifetime and even charted several pop hits, the biggest of which was his Top 10 rendition of "The High and the Mighty" in 1954. 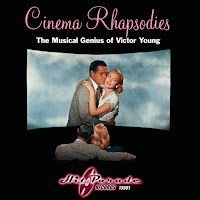 When I worked on the 2006 Victor Young CD Cinema Rhapsodies: The Musical Genius of Victor Young, I had the opportunity to talk to Young's niece, Bobbie Hill Fromberg. Young never had children of his own, so he and Bobbie were close.

Fromberg told me that she had researched her family's history and discovered from US Census records that Young falsified his birthdate in the early days of his career. He was born August 8, 1899, but gave his birth year as 1900, presumably to avoid the perception that he had been born in an earlier century. The liner notes of Cinema Rhapsodies set the record straight: "Albert Victor Young was born to a Polish family in a tenement district of Chicago on August 8, 1899, not 1900 as widely reported."

Six years later, in 2012, Albert Haim of the Bix Beiderbecke discussion forum Bixography, posted a message about Young's birth year, which continued to be a topic of speculation. Haim referenced the US Census data as well as Young's birth certificate:

Fromberg herself weighed in on the topic on the Bixography forum and explained the incorrect date on Young's grave marker:


I come from a family that never told the truth about their birth years. Victor was born on August 8, 1899 (I discovered from the 1900 Chicago census) My Mom made herself 6 years younger than she really was and both of their plaques [her mother's and Victor's] at Hollywood Forever Cemetery where they are buried facing each other in a mausoleum have incorrect years on them.

So there you have it.