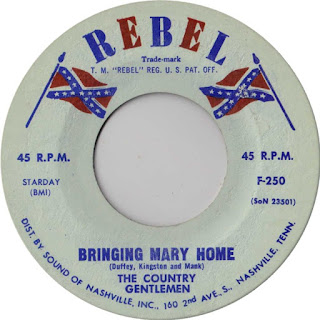 The Country Gentlemen were a long-running and enduringly popular bluegrass group from the Washington DC area, but they made only one appearance on the Billboard country chart throughout their existence, and it was with a Halloween ghost story. The song was "Bringing Mary Home" on the independent Rebel Records label, and it debuted on the Billboard chart the day before Halloween in 1965.

The single didn't crack the country Top 40 but came close, peaking at #43. On the Cash Box country chart, the single didn't register at all. (In 1967, the Country Gentlemen's single "Baby Blue"—which didn't chart in Billboard—became a minor Cash Box entry, so in Cash Box, "Baby Blue" was the group's only hit. "Baby Blue" was actually a version of Bob Dylan's song "It's All Over Now, Baby Blue.")

"Bringing Mary Home" was written by John Duffy (of the Country Gentlemen), Joe Kingston, and Chaw Mank and told the story of a driver's encounter with a girl who turns out to be a ghost. The narrative is similar to Dickey Lee's "Laurie (Strange Things Happen)," which had been a Top 20 pop hit earlier in 1965. In that song, a boy meets a girl at a dance and falls in love with her, but when he follows her home and knocks on her door, her father tells the boy that Laurie died a year ago.

"Bringing Mary Home" describes an encounter with a mysterious girl that comes to a similar conclusion, but the encounter occurs on the thirteenth anniversary of the girl's death, and the driver is the thirteenth person to bring Mary home.

Here are the lyrics:

I was driving down a lonely road on a dark and stormy night
When a little girl by the roadside showed up in my headlights
I stopped and she got in back and in a shaky tone
She said my name is Mary, please won't you take me home
She must have been so frightened all alone there in the night
There was something strange about her cause her face was deathly white
She sat so pale and quiet in the back seat all alone
I never will forget that night I took Mary home
I pulled into the driveway where she told me to go
Got out to help her from the car and opened up the door
But I just could not believe my eyes 'cause the back seat was bare
I looked all around the car but Mary wasn't there
A light shone from the porch, someone opened up the door
I asked about the little girl that I was looking for
Then the lady gently smiled and brushed a tear away
She said it sure was nice of you to go out of your way
But thirteen years ago today in a wreck just down the road
Our darling Mary lost her life and we miss her so
Oh, thank you for your trouble and the kindness you have shown
You're the thirteenth one who's been here bringing Mary home

The Country Gentlemen's record was covered by a few artists who issued competing single versions, but none was a chart hit. Covers included versions by Frankie Miller, Red Sovine, and Mac Wiseman. (Re-recordings of Wiseman's version are on YouTube.) 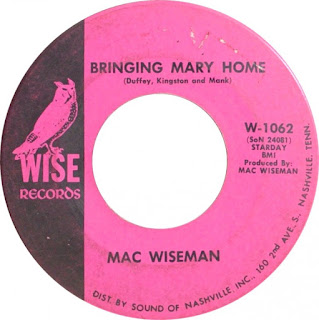 A number of artists recorded the song for albums around the same time, including Bill Clifton, Billy Edd Wheeler, the Willis Brothers, Don Reno, and Smiley Bates.
Although the song was only a modest hit, it became a popular choice of repertoire for folk and country artists around the world in the following years.