Wimp Factor 14: A retrospective and interview with Frank Boscoe 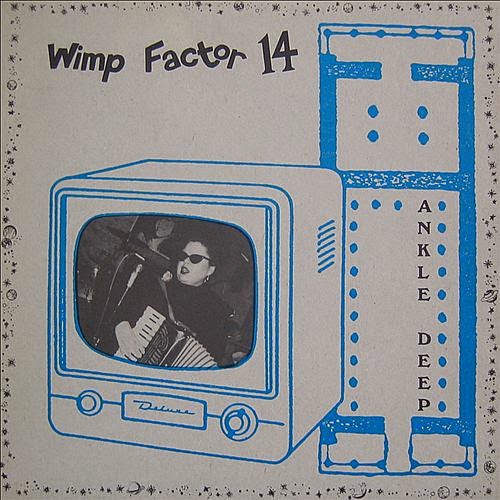 Pittsburgh's Wimp Factor 14 was included in the final Trouser Press book,The Trouser Press Guide to '90s Rock. It said that the band "mixes basic strum-pop with interesting instrumental touches (melodica, toy ukulele, zither, plastic bucket drums and so forth) to achieve an unusually inviting sound." I was obsessed with the Trouser Press back then, but that's not where I heard of Wimp Factor 14.

I mail-ordered the band's sole album, Ankle Deep, from Harriet Records when it came out in 1993. I had never heard anything by Wimp Factor 14; I just liked their name and was interested in Harriet Records, because I had (and still have) the early Magnetic Fields singles on Harriet. Also, the Ajax Records catalog described Wimp Factor 14 as "chamber pop," a term that was sometimes used to describe to the Go-Betweens. I was a huge Go-Betweens fan, so I hoped that Wimp Factor 14 would sound something like them.

Wimp Factor 14 didn't sound much like the Go-Betweens, but I liked them anyway. There is a kind of brainy, ramshackle indiepop that comes out of the northeast US, and WF14 is an example of that, like Winter Vacation and Pants Yell!.

The members of Wimp Factor 14 on Ankle Deep included Kate Glicksberg; Gary Miklusek, who played with Tullycraft; Joelle Levitt, who played in the B-3's; Rob Washburn; and Frank Boscoe. Boscoe went on to form the Vehicle Flips and then the Gazetteers. Rob Christiansen of the Eggs produced Ankle Deep, and the Eggs recorded WF14's song "Rebuilding Europe" for their 1994 album Teenbeat 96 Exploder.

In addition to the one album, Wimp Factor 14 cut a handful of singles and compilation tracks, most of which are included on the anthology The Bric-a-Brac.


How did Wimp Factor 14 come about?

It was a bunch of friends from Carnegie Mellon with ties to the campus radio station, WRCT.


I bought Ankle Deep because I liked the band name. What do you think were the ups and downs of that name?

On the whole, I think it is best to avoid band names grabbed from the day’s headlines [see image below]. That said, I think “The Right to Be Forgotten” would be a good band name.

That reminds me, while the band was active, there was a newspaper story with the headline “Donny Osmond Battles the Wimp Factor,” which could have made for some outstanding album cover art. 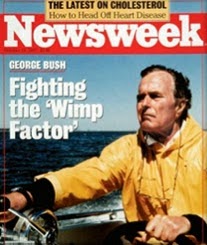 Harriet Records had a pretty well-defined aesthetic. Did you find Harriet or did Harriet find you?

I knew Tim Alborn even before I was in a band. I had a fanzine called Cubist Pop Manifesto, and Tim had a fanzine called Incite!, and we became pen pals. As a wedding present, I gave him a song I recorded with Karl Hendricks, which much later made it onto a Harriet compilation.


Did you feel like you were part of a scene there?

I did think our shows in Boston, both with Wimp Factor 14 and later Vehicle Flips, were among the best I ever had. It was great playing with the Magnetic Fields, Twig and its several related bands, and, later, Prickly. I believe I played in Boston every year from 1990-1997. I can confirm this; I have a list of all the shows I ever played, but it’s on a different computer.

[Note: There were four Wimp Factor 14 shows in Boston, all at the Middle East: June 1991 with Unrest, Love Battery, and Crazy Alice; December 1991 with Magnetic Fields and Cul de Sac; June 1992 with Crayon, Lotus Eaters, and Naked Lunchbox; and October 1993 with Tiger Trap, Spinanes, and Lotus Eaters.]


The CD version of Ankle Deep had elaborate nontraditional packaging. Was it a pain to put it all together? Did the packaging affect the album's commercial prospects?

Most of the credit for the packaging should go to Kate Glicksberg and Rob Washburn. Well, I guess I wrote most of the words in the booklet. Kate was a design major and really knew what she was doing.

If anything, it probably helped sales. Stores couldn’t put it in the usual bins, so some of them put it by the register with other oddities. The really remarkable thing is that a band like Wimp Factor 14 could sell 1,000 albums plus another 500 or so via the German vinyl release and be considered inconsequential. These days, the benchmark for success on a label like Jigsaw is 50 copies. It is mind-boggling.


CDs often had bonus tracks, but the Ankle Deep LP on Little Teddy has bonus tracks that weren't on the CD: "Change of Address Kit" from the ...One Last Kiss compilation, and "Sick Building Syndrome." Were they album outtakes? How did they end up on the LP?

They were songs that Andy Freiberger from Little Teddy liked and wanted to include. “Change of Address Kit” made some sense, because it got to be one of our better-known songs since that compilation did so well. “Sick Building Syndrome,” less so. Both songs were taken from the session that generated the last two singles ("Botch" and "Miracle Mile"), not the Ankle Deep session.

I remember that the Ajax Records catalog described Wimp Factor 14 as "chamber pop." How would you describe the band? Did you try to sound like anyone?

With Wimp Factor 14, we had all—except for Gary—been DJs at WRCT for three or four years, so we were well-steeped in the indie sound circa 1990. Our record collections didn’t necessarily overlap all that much, though. But unless you are explicitly, consciously trying to emulate some particular sound—which some bands do, of course—I think you just end up with a hybrid of what everyone brings with them, not only based on tastes but also on the gear you have as well as your playing ability, even where you are able to rehearse. The end result is still likely going to sound like something familiar and recognizable, but still distinctive.

It was actually the only tour I ever had. Everything else was just a long weekend. Even the tour with Crayon was pretty short: two weeks. We had a show all but one day, and relatively short drives for the most part, thanks to the great booking of Vicky Wheeler, who would go on to found Autotonic. We got as far west as Iowa. We got to be good friends with Crayon—Gary Miklusek, of course, would later be in Tullycraft—and rode in each other’s vehicles for variety’s sake.

Crayon had an old VW camper van that required leaded fuel; we had an ordinary sedan with the gear in a clamshell on top. Given that limited capacity, we necessarily borrowed a lot of things. During the longest drive, which I think was Pittsburgh to Richmond, we tried to identify the 64 colors in a standard box of crayons. As I recall, the one we never got was orchid; Jeff from Crayon insisted there was a color called “smoke.”

During our one night off we got to see Jonathan Richman in Bethlehem, PA. We kept meticulous accounting, and at the end had a net profit of $4: $1 each.


What were some of your most notable successes with Wimp Factor 14?

Getting included in the Trouser Press Record Guide was possibly our biggest claim to fame, and a big deal for me personally, as in high school this was my bible. We almost got to tour Europe, supporting the Chrysanthemums for a few weeks, but the details were always vague and never quite materialized. I couldn’t convince Gary or Rob to buy tickets, but Kate and Joelle were up for it, and the three of us did end up playing three shows in Germany, thanks to Andy Freiberger, though only one of these was a real show. The other two were more like parties.


And then you formed Vehicle Flips? Which didn't sound extremely different from WF14....

After this experience I was kind of burned out and decided something different was in order, though, as you point out, it wasn’t that much different.
I also wanted to add that we came up with something with the band Eggs that I believe rates a tiny footnote in the annals of music. I was thinking a lot about how set changes were so slow and inefficient. In a world of 35-minute sets, 20 minutes between bands soaks up a lot of time. Of course, that ratio is good for the audience to converse and buy drinks, so maybe it wasn’t even a problem. Anyhow, one way around this was to have one band’s last song be the next band’s first song. Presuming that amps and drum kits are being shared, players could leave and be replaced one by one while the song continued. We selected the song “Hydroplane” by Unrest because it is one chord and can be played as long as necessary. We managed this twice: once with Wimp Factor 14 first, once with Eggs first. I doubt if any recording exists. We weren’t very good at documenting ourselves beyond through the records.


Do you have any band photos? Few photos of Wimp Factor 14 seem to exist.

I asked Kate if she had any unpublished photos. She reminded me of the photos taken during the Ankle Deep recording, which coincided with one of the larger snowstorms to ever hit DC in our lifetimes. There are some great images of us during heavy snowfall. She said they would be in her mom’s basement, so it could be a while until they are found, but eventually we’ll get something to you. As for video, I don’t know of any at all. It’s true that camcorders weighed 10 pounds back then, but that didn’t stop every other band. What were we thinking? 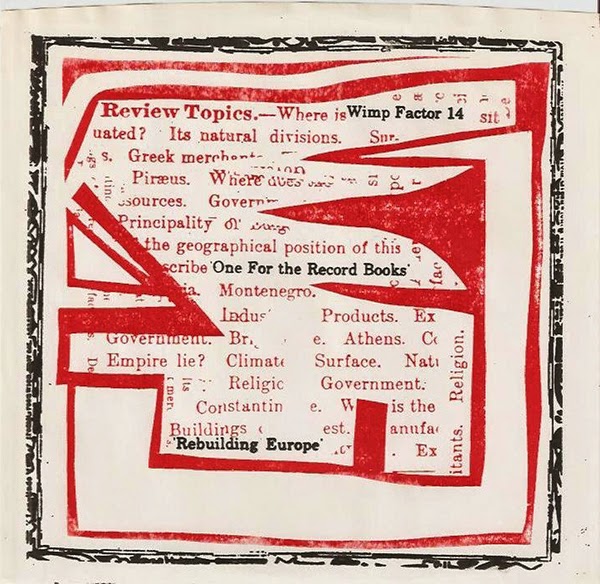 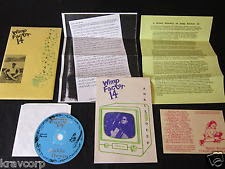 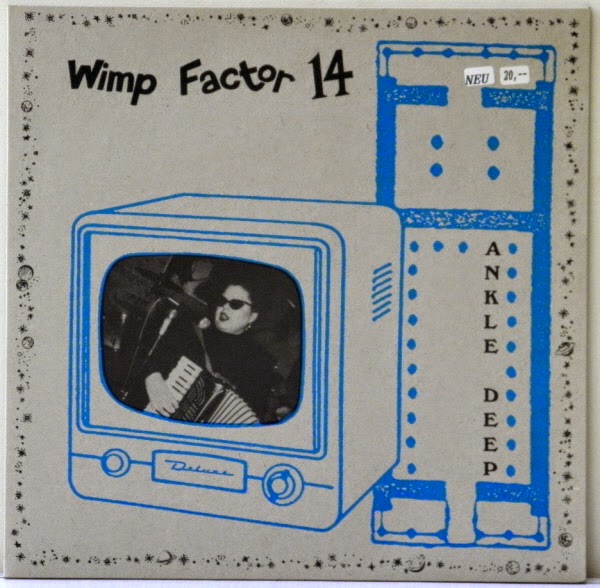 The Bric-a-Brac (No label; CD-R compilation of singles and stray tracks) 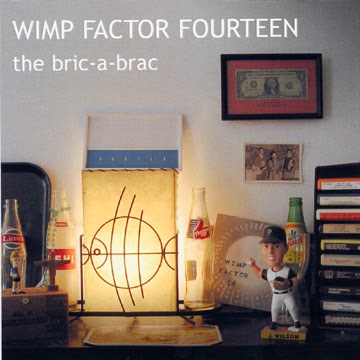 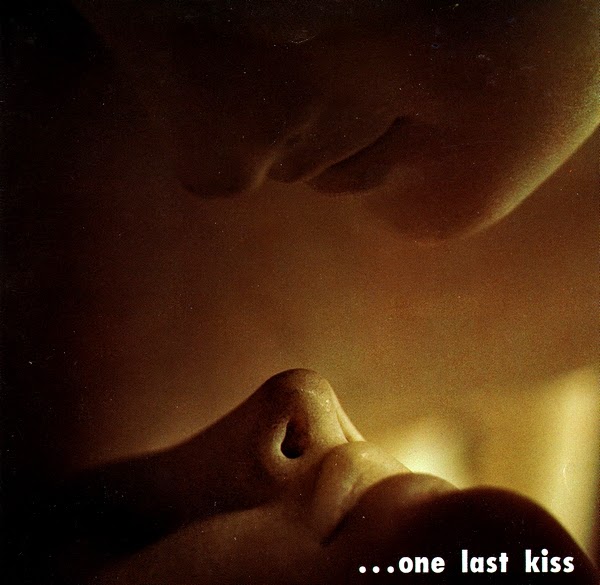 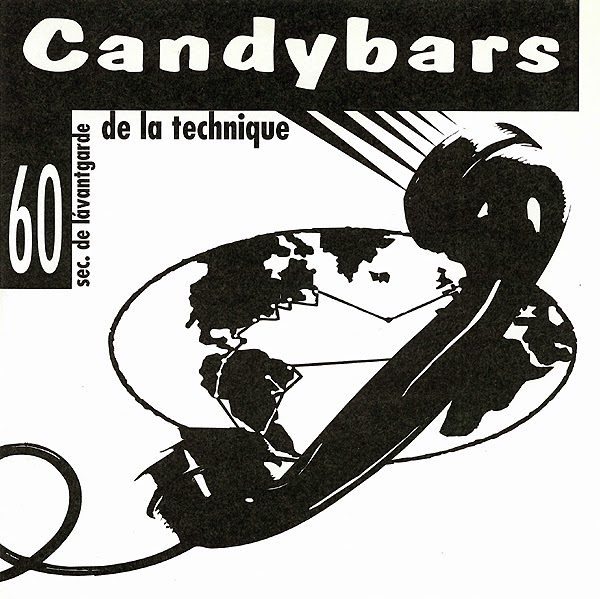