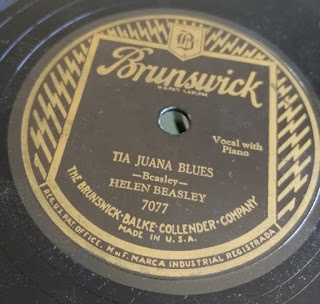 Indiana is not known as a hotbed of the blues, but I was surprised while browsing the book Blues: A Regional Experience to see that only one blues singer was listed for the entire state: Helen Beasley, who waxed a single record in 1929. However, after looking into her biography a bit, I'm not sure that Indiana can claim her.

Beasley made three recordings in her brief recording career, all of which were cut in a Chicago studio for Brunswick Records. The recordings were unadorned, consisting only of Beasley's vocals and a piano that was probably played by fellow Brunswick recording artist Frances Wallace, according to Blues & Gospel Records, 1890-1943, Fourth Edition.

Her first session was a test recording of a song called "California Bound Blues" on April 18, 1929. A week later, on April 25, she recorded "Tia Juana Blues" and "Rambling Mind Blues," two original compositions that Brunswick released on a 78 as Brunswick 7077.

Because of the similarities between the lyrics of "Tia Juana Blues" and the title of "California Bound Blues," some have surmised that they're actually the same song.

As Wim Verbei points out in his book Boom's Blues: Music, Journalism, and Friendship in Wartime, "Tia Juana Blues" has a odd stylistic quirk that recurs throughout. Beasley, instead of breaking up her couplets where a pause would normally be expected, pauses in the second couplet. So, instead of singing this:

I'm going to California, sweet man / just to wear you off my mind

I'm going to California, sweet man, just to / wear you off my mind

This unconventional phrasing is clearly an artistic choice on Beasley's part, because she repeats the formula throughout the song.

The other side of the single, "Rambling Mind Blues," is a bit quirky, too, because of Beasley's nearly constant use of the vocal technique known as scooping.

After that, she either moved on to other things or didn't garner enough sales to merit an additional release, because that appears to have been her only single.

Beasley's listing in Blues: A Regional Experience provides very little biographical information, but it's nevertheless more information than I found anywhere else. Unfortunately, it also appears to be incorrect. It says she was born Helen Slaughter in Indiana on April 25, 1895, and died in Los Angeles on February 3, 1972, but adds that this information is tentative. On the basis of my research, I don't think any of this information relates to Helen Beasley the blues singer, which calls into question whether Beasley was from Indiana at all.

Slaughter's obituary in the February 5, 1972, issue of the Bakersfield Californian doesn't mention anything about singing, but more significantly, it gives her husband's name as Paul Slaughter, which means that Slaughter was her married name, not her birth name. Also, Paul was white, and although interracial marriages weren't unheard of in mid 20th century America, they were uncommon.

SLAUGHTER, HELEN MARIE — Rosary will be recited at 8 p.m. Sunday at The Hopson Mortuary Chapel and Requiem Mass will be said at 11 a.m. for Helen M. Slaughter, 77, who died Thursday in a Los Angeles convalescent hospital. Msgr. Patrick Hannon will officiate, and interment will follow in Union Cemetery. Mrs. Slaughter, a native of Indiana, had resided in California 50 years. She had been a resident of Bakersfield many years prior to making her home in the Los Angeles area three years ago. Mrs. Slaughter had been self-employed in the antique business for many years. Her husband, Paul, died in 1963. Survivors include one daughter, Ann Jensen of Los Angeles; four grandchildren; a sister-in-law, Mrs. Blyth Slaughter of Modesto, and several cousins. Mrs. Slaughter was a member of the Altar Society of St. Joseph and the Third Order of St. Francis.

I also found some ads for the antique store, Old House Antiques, that Helen Slaughter ran with her husband. Here's one from 1949:

Interesting, but most likely irrelevant to the blues. Although it seems questionable to me now whether Helen Beasley came from Indiana at all, the state can claim Scrapper Blackwell as a native son. Wikipedia lists his birthplace as Syracuse, South Carolina, but other sources say he was born in Indianapolis where he grew up, recorded his first record in 1928, and died in 1962 after being shot during a mugging.

Beasley's two commercial recordings are included on the Document Records CD Blue Girls, Volume 1: 1924-1930 and can be heard in the YouTube videos below. Her test recording of "California Bound Blues" remains unreleased. 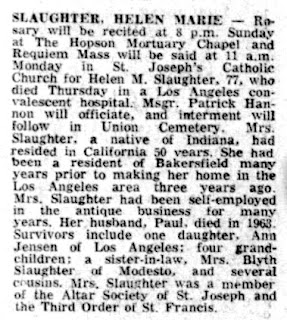